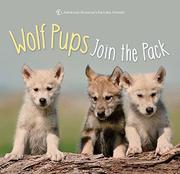 From the First Discoveries series

by American Museum of Natural History

A photo album of young wolves running, playing, and growing through their first year.

Light on factual details, the uncredited text largely runs to vague observations along the lines of the fact that “young wolves need to rest every now and then” or that packs “differ in size. Some are large and have many wolves, while others are small with only a few.” The chief draws here are the big, color, stock photos, which show pups of diverse ages and species, singly or in groups—running, posing alertly with parents or other adult wolves, eating (regurgitated food only, and that not visible), howling, patrolling, and snoozing as a seasonal round turns green meadows to snowy landscapes. In a notably perfunctory insertion squeezed onto the final spread, a wildlife biologist from the American Museum of Natural History introduces himself and describes his research work—all with animals other than wolves. Budding naturalists should have no trouble running down more nourishing fare, from Seymour Simon’s Wolves (1993) to Jonathan London’s Seasons of Little Wolf (illustrated by Jon Van Zyle, 2014) and on. Baby Dolphin’s First Swim follows the same formula even down to profiling exactly the same wildlife biologist.

A bland also-ran trailing a large litter of like-themed pups.