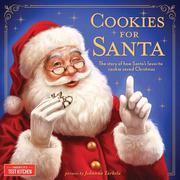 The Story of How Santa's Favorite Cookie Saved Christmas

The story is premised on the conceit that Santa’s annual Christmas preparations include making Krinkle cookies (recipe included in backmatter) for everyone at the North Pole. Alas, his heirloom cookbook with the recipe is lost, and he’s worried “everyone will be disappointed.” In an abrupt cutaway to Boston, readers meet Abigail and William, visiting the library with their mother. Unbeknownst to the precocious gourmand Abigail, the cookbook she borrows is the one Santa is missing. How it got to Boston and onto the library’s shelves is unclear, but she makes this connection when watching a television broadcast that Santa and Mrs. Claus host annually, and he sadly bemoans the loss of his cookbook. With Christmas just two days away, Abigail’s family decides they can’t get him the recipe, but they can bake cookies and enlist others’ help. America’s Test Kitchen, whose offices are conveniently just down the street, helps out—both with discerning some artfully named ingredients and soliciting viewers to also make more cookies for Santa to enjoy and share. It’s a happy ending, but Tarkela’s illustrations here and elsewhere are stiff and redundant, undermining the book’s overall success. Characters’ irises are oversized, giving them a distinctly creepy look. Santa and Mrs. Claus present white while Abigail and William seem to be biracial, with an Asian mom and white dad.

This sweet story is sadly underbaked.