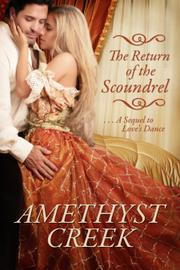 THE RETURN OF THE SCOUNDREL

In this historical sequel to Love’s Dance (2017), set at the end of the 19th century, a ruthless convict escapes prison and seeks revenge against the woman who put him there.

After Bridger Crandall’s illegal financial scheme was exposed by wealthy heiress Maggie Lenihan, he unsuccessfully attempted to murder her, which landed him in the Colorado State Penitentiary for 25 years. Seven years into that sentence, in 1887, Bridger escapes and starts a new life under the name “Richard Rutledge,” working for Sloan Talbott, a successful prospector in Leadville, Colorado. That town is dangerously close to the ranch outside Greeley where Maggie now makes a home with her husband, Garret Blackstone. Bridger is hungry for vengeance, and he serendipitously finds an opportunity to get it: Joseph Bainbridge, an affluent businessman, has hired Sloan’s sister, Libby, as a teacher in Greeley, and she’s moved in with Maggie and Garret. Bridger uses his considerable charm to coax information out of Libby; she’s soon infatuated with him and unsuspecting of his motives, which allows him to freely pursue his plans. Meanwhile, the warm friendliness of the wealthy, handsome, and single Bainbridge piques Libby’s interest. Then Maggie, who’s expecting her second child, finds out that Bridger is on the loose, and she can only anxiously wait to see what he intends to do—and Creek poignantly depicts her fright. The novel as a whole, like its predecessor, brims with intrigue, suspense, and romance, and the author effectively presents all of these elements in a propulsive plot that never loses steam. Creek seems to be aiming to explore the malevolence of which man is capable, but the earnest, companionable prose isn’t especially well-suited to this ambitious task. Although there’s a surfeit of drama here, it lacks a sense of grittiness, overall. One can enjoy this story without reading its predecessor, but it will likely be a less fulfilling experience than reading both books in sequence.