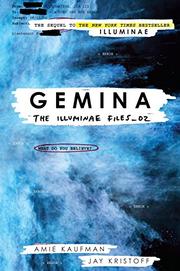 From the Illuminae Files series, volume 2

Continuing Illuminae’s (2015) story, Kaufman and Kristoff explore what went down on Jump Station Heimdall while the spaceship Hypatia was trying to get there.

This time around, the found-footage–style collage narration (instant messages, radio conversations, video transcripts, diary pages, and the like) is framed as evidence at a tribunal investigating the activities of BeiTech Industries. The station commander’s white teenage daughter, Hanna, and her white drug dealer, Nik, avoid death and capture when a multiracial commando team of BeiTech “auditors” board Heimdall to take over its wormhole (which badly needs maintenance) for a BeiTech drone assault fleet sent to eliminate Kerenza’s witnesses. With lots of sneaking, combat, quick thinking, and the crucial help of Nik’s younger cousin Ella (a quippy, brilliant hacker disabled by a space plague she barely survived), they throw everything they have against their better-armed and -trained assailants. But the drug operation relies on mind-eating, multiheaded, predatory parasites with psychoactive venom, and with the cartel out of action, the carefully tended newborns get loose on the station, and are they ever hungry! Tension snowballs with each new small complication, resulting in a read harder to put down with each page. Despite superficial similarities (protagonists and formatting—not all final art seen) to Illuminae, forward plot motion and surprises right up to the cliffhanger ending keep this its own book.