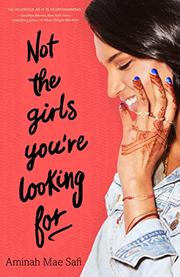 NOT THE GIRLS YOU'RE LOOKING FOR

Leila “Lulu” Saad is about to graduate from high school with her three best friends by her side, but things get messy and senior year becomes a little more complicated than expected.

Lulu just wants to be an Iraqi-American living a normal teenage life in Houston, Texas. But that’s not possible when your (presumably white) Catholic mom is from Louisiana and her family has been openly hostile since your maternal grandmother, the matriarch of the family, passed away. It’s hard when your Muslim dad is from Iraq and you’ve grown up as an Arab-American Muslim who drinks and frequents all the latest parties but still fasts during Ramadan. Navigating high school is tough enough with graduation, boys, gossip, family, and friends, but Lulu also has to deal with Islamophobia at school, a war that threatens her family thousands of miles away, an incident in which sexual boundaries are overstepped, and the cross-cultural puzzle that every child of immigrants must learn to piece together in their own way. Lulu’s stubbornness and desire to make both her worlds meld lands her in isolation from both family and friends. Safi’s debut novel offers Arab and Muslim readers a teenager they can relate to as they too learn to navigate racial and religious tensions in a predominantly white society.

Delightful and funny but still giving voice to serious issues of sexual consent and xenophobia.