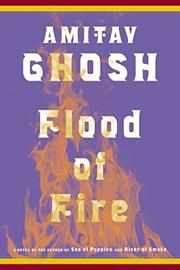 Ghosh completes his epic Ibis trilogy with a book focusing on the First Opium War of 1839 to '41 and culminating in battles between the British navy and Chinese ports.

As befits a saga of this magnitude, there’s no center but rather a cluster of subplots and a dazzling variety of characters and relationships, both personal and professional. Foremost among them is 21-year-old Zachary Reid, who at the beginning of the novel is acquitted of murdering the first mate of the schooner Ibis. He continues his career under the watch of Mr. Burnham, who eventually settles on Reid to help move his cargo of opium from Calcutta to China—and to use the “free market” to sell opium for a substantial profit along the way. Meanwhile, Reid comes under the sway of Mrs. Burnham, who spends a great deal of time puritanically warning him about the dangers of “onanism” …and then begins a torrid affair with him. Another subplot involves the military maneuvers of Kesri Singh, a sepoy officer with a regiment of the Bengal Native Infantry. He and his commanding officer wind up in the center of battle as the action moves from India to China. Yet another subplot involves Shireen Modi, whose husband dies and who is thus forced to take over his business activities, including the potentially bankrupting loss of a huge opium shipment. Somehow, throughout the machinations of the characters and the logistics of business and militarism, Ghosh brings everything together as ships and troops converge on China for a climactic battle.

At times slow-moving and repetitive, this novel still provides a satisfying sense of closure to the political and personal issues Ghosh opened up more than a thousand pages earlier.