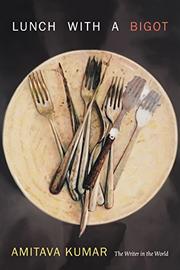 LUNCH WITH A BIGOT

The Writer in the World

Kumar (English/Vassar Coll.; A Matter of Rats: A Short Biography of Patna, 2014, etc.) reflects on an eclectic array of personal, professional, and political topics.

The 26 essays included in this collection represent what the author calls “memorial acts” dedicated to “examining the borders of the self” in relation to the world. Published over a period of 15 years, these pieces, which run the gamut from memoir to journalistic reportage to literary/cultural criticism, chart Kumar’s evolution as a distinguished Indian-American thinker and writer. In the first of four sections that comprise the book, the author recounts his experiences growing up in a culture where paper was a near-sacred object and where books and libraries were considered the height of “worldliness.” His own intellectual coming of age began after he arrived in the West as a student and became exposed to the mischievously subversive work of such writers as Hanif Kureishi and, later, Salman Rushdie, both of whom offered Kumar new ways of conceptualizing South Asian selfhood. In the second section, he considers his own writing, exploring how his work has been influenced by everything from Bollywood cinema to his life as a husband and doting father. He also discusses the disciplined habits that shaped him as a writer. In the third section, Kumar meditates on the effects that travel, migration, and immigration have had on his ideas about the nature of being in a transnational world. Time and space become conflated so that a return to India means he becomes “a tourist in that country called the past.” In the final section, Kumar examines people, including his mother, New York taxi drivers, and a conservative Hindu extremist—the  “bigot” to which the title refers—who denounced Kumar for marrying a Pakistani Muslim. Heterogeneous and complex, this book offers insight into Indian culture from a multitude of complex spaces between East and West.

An exuberantly inquisitive collection of essays.