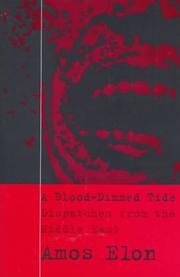 Dispatches from the Middle East

Twenty-one sparkling essays (originally published in the New York Review of Books and elsewhere) on Israel and the Middle East, covering the period from the Six-Day War up to Benjamin Netanyahu's recent election as Israel's prime minister, by the insightful veteran Israeli journalist, historian, and biographer. Elon (Founder: A Portrait of the First Rothschild and His Times, 1996, etc.) focuses largely on political and diplomatic events. In two essays written in the immediate aftermath of the Six-Day War (including the quadrupling of Israel's territory), he presciently expresses concern that his country's extraordinary, lightning-quick victory has been ``marked by more than a trace of arrogance'' and has seemingly resulted in ``a somewhat new, animistic cult of holy places.'' Elon also has a knack for interviewing the right people—not only policymakers, but dissidents and intellectuals who understand a political culture's underlying dynamics. A refreshing change of pace occurs in his more leisurely profiles, particularly one on Yair Hirschfield and Ron Pundik, two academics turned ``freelance'' diplomats who played a key role in initiating and negotiating the 1993 Oslo agreement between Israel and the PLO. His celebrations of the political, cultural, and architectural ambience of Amman, Cairo, and Alexandria, are vivid and persuasive. Referring to the latter, a Mediterranean port that once had significant Greek, Jewish, and other foreign communities during the first centuries a.d., Elon calls it ``the New York of the ancient world, the first world city.'' These pieces make one regret that Elon doesn't turn more often to consider modern Israeli culture and society. When he does, he is powerful and direct, as in a piece describing (and decrying) ``the latent hysteria'' in Israeli life induced by the memory and misuse of the Holocaust. One could not ask for a more informed and discerning guide than Elon to both what is tiresomely old and startlingly new between Israeli Jews and their Arab antagonists and partners.