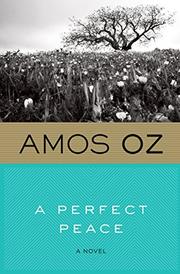 Generation gaps on a kibbutz in 1965 Israel--as Oz (In the Land of Israel, The Hill of Evil Counsel) once again highlights the socio-political conflicts within the Israeli population, counterpointing the ideological tensions with domestic strain and sexual ambivalence. Yonatan Lifshitz, 26, was born and ragged on Kibbutz Granot; he is the son of kibbutz secretary Yolek--who, as a brawny Labor Party pioneer (Levi Eshkol, now P.M., is an old friend/rival), represents one prototype of young Israel's founding generation. Yonatan, however, is an introvert who recoils from all of the burly kibbutz values, disdaining work duties in the truck shed. He feels trapped--by family and society, by his childless marriage (wife Rimona has had two doomed pregnancies). And, in this ""long and rainy winter between wars,"" he prepares to leave forever, silently rehearsing farewell speeches: ""Father. Mother. Goodbye. . . You dressed yourselves in rags, and ate dry bread with olives, and worked like coolies all day long, and sang yourself hoarse every night, and lived in an ecstatic trance, and gave me a white, white room with a housemother in a white, white apron who fed me white, white cream to make me a clean, honest, hard-working Jewish boy with a soul of forged steel. . . You poor suffering heroes, you miserable messiahs of the Jews, you tame-souled tamers of the wilderness, you crazy saviors of Israel, you fucking maniacs, you tyrants with diarrhea of the mouth!"" Meanwhile, confused father Yolek composes lamentation-letters to old friend Eshkol--about the decadent Israeli youth, ""a new exile sprouting right under our nose."" Meanwhile, too, Yolek's wife Hava bitterly muses on the pioneer-politician's failings as husband and father. Likewise, the kibbutz's assistant-secretary has little use for the Ben-Gurion protâ€šgâ€šs--""their concealed hatreds, their cunning, their self-induced illnesses, their endless recourse to Yiddish and quotes from the Bible."" But there's also a newcomer to the kibbutz, young orphan Azariah Gitlin, Holocaust survivor/immigrant: he eagerly tackles kibbutz labor, talking nonstop of Jewish history; he becomes part of a strange mâ€šnage â€¦ trois with Yonatan and Rimona--who now becomes pregnant. . . but by whom? (There's similar mystery about the paternity of Yonatan himself.) And though Yonatan does eventually flee from the kibbutz, wandering south to the Jordan border, he'll ultimately return, both resigned and inspired--and prepared to share Israel's future (Rimona's child) with Azariah and the kibbutz. Here, and elsewhere, Oz's ambitious interweaving of political themes with domestic ones is sometimes less than successful, over-reaching. Throughout, however, the interplay of voices and issues is fresh, provocative, fascinatingly complex--with shrewd close-ups of melancholy second-generation Israel, ""an entirely different tribe,"" paradoxically rootless.