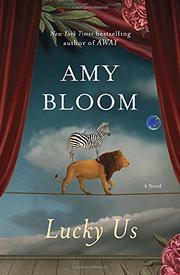 On a journey from Ohio to Hollywood to Long Island to London in the 1940s, a couple of plucky half sisters continually reinvent themselves with the help of an unconventional assortment of friends and relatives.

In 1939, 12-year-old Eva is abandoned by her feckless mother on her father’s Ohio doorstep after the death of his wealthy wife. After a couple of years of neglect, Eva and her glamorous older half sister, Iris, escape to Hollywood, where Iris embarks on a promising career in film—until she's caught on camera in a lesbian dalliance with a starlet, which gets her blacklisted. With the help of a sympathetic gay Mexican makeup artist as well as their con-artist father, Edgar, who has recently reappeared in their lives, the girls travel across the country to New York and finagle jobs at the Great Neck estate of a wealthy Italian immigrant family. Hired as a governess, Iris promptly falls in love with the family’s pretty cook, Reenie, inconveniently married to Gus, a likable mechanic of German ancestry. In this partly epistolary novel interspersed with both first-person and third-person narration, Bloom (Where the God of Love Hangs Out, 2010, etc.) tells a bittersweet story from multiple viewpoints. The novel shares the perspectives of Eva, Iris, Edgar, Gus and Clara, a black nightclub singer who becomes Edgar’s live-in girlfriend and companion to Eva. Though the letter-writing conceit doesn’t always ring true, since it's unlikely that one sister would recount their shared experiences to the other in letters years later, the novel works in aggregate, accumulating outlooks to tell a multilayered, historical tale about different kinds of love and family.

Bloom enlivens her story with understated humor as well as offbeat and unforgettable characters. Despite a couple of anachronisms, this is a hard-luck coming-of-age story with heart.