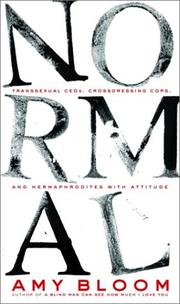 Psychoanalyst and story-writer Bloom (A Blind Man Can See How Much I Love You, 2000, etc.) aims to expand our notion of what is normal by showing up-close the lives of people widely considered to be abnormal: female-to-male transsexuals, heterosexual cross-dressers, and the intersexed.

Individuals who have altered female bodies to match their male self-concept, plastic surgeons who perform female-to-male sex change surgery, and psychiatric researchers into transsexual transition all share their thoughts with the author, and the surgeons also provide graphic images of their handiwork. Bloom takes the reader to a conference of transsexuals and cross-dressers at a southern motel, on a Carnival cruise hosting heterosexual cross-dressers and their wives, and to a Missouri convention of cross-dressers featuring a beauty pageant. She describes these men with a fetish for women’s clothes as “Presbyterian accountants from Cedar Rapids and Lutheran ministers from Omaha . . . decent, kind, intelligent, and willing to talk openly.” (Their wives seem resigned yet supportive.) Perhaps the saddest chapter of Bloom’s report on gender variability is the one on hermaphrodites, as intersexed individuals are often called. The assumption that a baby born with a minuscule, malformed penis or a greatly enlarged clitoris would be better off “normalized” has led physicians to perform reconstructive surgery on newborns, an approach that is now challenged by the Intersex Society of America, which urges doctors to proceed with caution and provides counsel and support to parents. The angry voice of someone subjected to childhood surgery, declared first a girl, then a boy, then a girl, makes for painful reading. Yet the intersexed are the least convincing cases in Bloom’s contention that nature is infinite in its variety and has not made mistakes with these people; she makes her strongest argument with the examples of heterosexual cross-dressers.