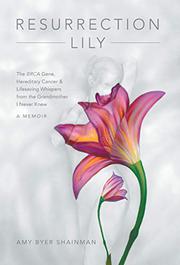 A woman recounts a decision to pre-empt cancer by surgical means.

In 2008, debut author Shainman’s older sister, Jan (whom she affectionately calls “Sista”), was diagnosed with ovarian and uterine cancer. After several rounds of chemotherapy, Sista’s cancers went into remission, but at a later conference on ovarian cancer, she learned she was especially vulnerable to a recurrence. She underwent genetic testing that revealed that she was “BRCA1 positive,” meaning she had a genetic mutation that significantly increased the chances of contracting breast or ovarian cancer. Shainman quickly decided to get tested, as well, and discovered that she also carried the mutation. This presented her with an achingly difficult choice: Should she strategically choose to undergo prophylactic surgical procedures (bilateral mastectomy, breast reconstruction, bilateral salpingo-oophorectomy, and hysterectomy), or take her chances, and avoid elective, risky operations? The author’s remembrance is unconventionally eclectic; she includes correspondence with friends and family, journal entries and text exchanges, and a lengthy discussion of her view that she’s gifted with a type of emotional “telepathy.” She chronicles not only her own struggle and her sister’s plight, but also her husband’s work colleague’s cancer fight. Also, as her family’s historian, she determines that her paternal grandmother, Lillian, certainly died from breast cancer. Shainman’s memoir is poignantly inspirational throughout; she later writes that she eventually became an advocate for BRCA awareness, and even executive-produced a movie about it in 2015 called Pink & Blue. In addition, she provides sensible information about medical due-diligence, especially involving genetic testing. However, her prose can be cutesy at times, as when she sizes up her anchorman husband’s co-worker: “So, this dazzling woman is whom my husband has been hanging out with on the news set in the middle of the night and early morning? Argh!”

An informative and moving recollection, despite some overly precious prose.