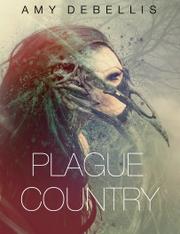 Fifteen-year-old author DeBellis’ debut young adult novel is a futuristic, dystopian tale that pits a group of teens against a new virus.

This science fiction story opens as protagonist January makes one last desperate trip into the chaotic, decimated town of Dyruit. A bubonic plague–like disease has been tearing through the region in the wake of a devastating economic collapse that wore the country’s resources down to bare bones. January and her sister, Cara, are fleeing south to Traxa, the capital, where it’s said to be safe—and where they believe their parents have been living since they mysteriously left the girls seven years earlier. This sisterly bond and inevitable rivalry keeps these characters sympathetic and relatable throughout the book. As they drive south in one of the area’s few remaining cars, they see scenes of depleted natural resources and devastation. When their car dies, the girls pick up their belongings and begin to walk—a gun in easy reach. Soon they happen across a boy named Nev and coerce their way into his car. The close quarters make it easy for Cara to begin trusting Nev, but January’s suspicion takes longer to wear off. Upon arriving in Traxa, the sisters start the fearful search for their parents’ whereabouts. As the story progresses, readers see Nev become only the first of several friends for the girls; it’s these friendships that help the teens survive the challenges ahead and regain hope. The plot, characters and voice of DeBellis’ novel will engage teen readers from the very first page. The pacing is spot-on, keeping things moving without leaving readers in the dust. While the events are far from readers’ experiences, the characters’ emotions and interactions are relatable to today’s teens. Though the story doesn’t draw strict references to the present, some readers might consider it a disturbingly realistic vision of the future.

This suspenseful sci-fi story packs the kind of energy and danger teen readers thrive on.