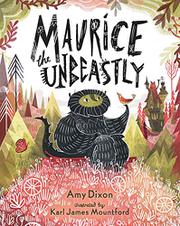 A misfit monster comes into his own when the Abominable Academy for Brutish Beasts is invaded by a scary creature.

Sweet of voice, vegetarian, and “ridiculously photogenic,” Maurice is not only the despair of his hairy parents, but on the verge of being kicked out of school for singing when he should be roaring, dancing when he should be practicing havoc-wreaking, and sneaking alfalfa fritters into the rioting lunchroom. When a frightening invader—which is to say, a frisky small dog—sends the monstrous students and teachers into tizzies, though, Maurice tames the beast with a fritter and so earns the title of Official Creature Whisperer. Not content to rest on his laurels, he leverages this “gargantuan success” by going on to organize an a cappella group called The Barbaritones and campaign for more lunch options (“Raise Your Tail for Kale”). Just as the story celebrates differences, so do Mountford’s cartoon illustrations, which surround Maurice (a Wild Thing outtake with green skin and human facial features) with an array of fellow student monsters, no two of whom look even remotely alike.

An urbane take on the “nice monster” theme.