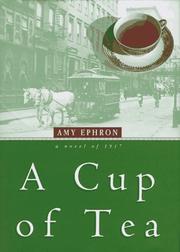 A CUP OF TEA

Screenwriter/novelist Ephron (Biodegradable Soap, 1991, etc., and the film A Little Princess) claims that this tragic romance, set in WW-I New York, is inspired by a Katherine Mansfield story, but her sketchy characters, unconvincing historical detail, and hopelessly wooden prose hardly benefit by the comparison. It's the winter of 1917, and the US is on the brink of war, but New York socialite Rosemary Fell refuses to let international events interfere with her wedding plans. Motherless from a young age, Rosemary depends on her fiancÇ, Philip Alsop, and best friend, closet lesbian Jane Howard, to provide her with diversion, advice, and news of the world. But she acts on her own whim when, out shopping one day, she spots a poor young woman on a street corner and decides to take her home and fix her up. It takes only a few hours for Rosemary to realize that Eleanor Smith, the unfortunate product of a broken family but younger and prettier than she, is far too attractive to Philip to keep around. She dispatches Eleanor back to the streets at once, a few dollars clutched in her hand. With Jane's help, Eleanor finds a job in a hat shop, and inevitably she's there the day Philip drops by to pick up an order for his fiancÇe. The two become lovers, irresistibly drawn to each other despite Philip's ensuing marriage, and continuing so even after his posting to Europe and after erroneous report of his death on the battlefield. When Philip returns to America to find that Eleanor has borne his illegitimate child, he swears he'll leave Rosemary- -only to be foiled by his distraught young wife, who turns out to be not so oblivious after all. A failed experiment in historical fiction. Ephron should stick to what she knows.