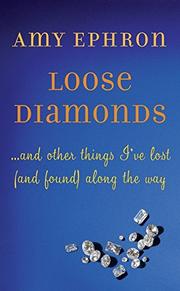 ...and Other Things I've Lost (and Found) Along the Way

Sex and the City meets Erma Bombeck in this gossamer gathering of recollections from novelist Ephron (One Sunday Morning, 2005, etc.).

True to its title, the book flaunts the glimmers of memory that the author haphazardly crafts into vignettes detailing her bohemian-chic adventures in Los Angeles and New York—with an emphasis on the chic. Starting off as a wild child in the 1970s, she recounts swilling champagne with glamorous friends, buying couture from Saks Fifth Avenue and interviewing Manson Family member Squeaky Fromme at the Spahn Ranch. Ephron’s most entertaining anecdotes date from this era, as she name-drops celebrity friends and shines a light on the inner workings of the National Lampoon during its heady countercultural years. Less sparkling are her attempts to frame her contemporary life with her second husband and five children as a Beverly Hills version of Cheaper by the Dozen. Readers may find it difficult to conjure much empathy for a woman who disparages Elizabeth Taylor’s gigantic diamond ring as extravagant, but laments the theft of her own baubles fashioned by the likes of Tiffany, Cartier and Elsa Peretti. This theft, one of several that hit the Los Angeles area, understandably shook up the author, and the event functions as a sort of connecting thread for the collection. However, even when commenting on the serial burglar’s habit of creating a different persona for each house, she fails to delve further. Accounts of the hostile mothers at her son’s private school similarly fail to engage. While Ephron has enough of a sense of humor to keep these pieces from completely lacking in self-awareness, her writing too often skims the surface, even for comic musings. Likewise, the more somber essays addressing her mother’s depression and Ephron’s own experience with date rape are meandering and unfocused.

These bagatelles offer glittering diversion but little of lasting worth.