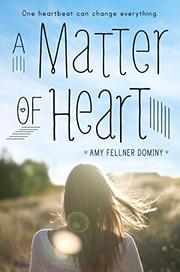 A MATTER OF HEART

It all comes down to heart for one athlete.

Abby is on top of the world. She routinely blows her competition out of the pool and is on the verge of qualifying for the Olympic trials at 16, thus fulfilling her father's thwarted dreams for himself. She's got her loyal best friend, Jen, and her handsome, easygoing boyfriend, Connor, both fellow swimmers. The only problem is Alec, whose questions about Connor's performance in the pool also extend to Abby. But then Abby gets dizzy and faints after a race. A doctor's visit reveals she has hypertrophic cardiomyopathy, a heart condition that is often a cause of unexpected death in teen athletes. It's treatable with beta blockers—but Abby can't swim fast on the pills. And without the pills, she risks death every time she's in the pool. Abby makes all the expected mistakes as she comes to grips with her diagnosis, including offering sex to a no-longer-interested Connor. It will take time, support and love for Abby to figure out who she is without swimming. Dominy writes Abby’s narration in the first person, giving readers a poolside view to her process; it’s not flashy, but it works. All in all, this is a solid look at an elite athlete who gets benched: Only the juicing subplot underperforms, although it helps to define character motivations.

An enjoyable read even for couch potatoes.