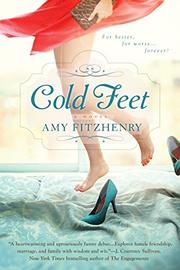 Before Emma Moon ties the knot, she wants to know why her father walked out on her months after she was born.

Emma has always lived by the motto "Be the first person to jump ship." Her aversion to commitment is understandable after a lifetime with a mother who's kept her at arm’s length and a father who walked out of her life. This parental combo has left Emma with a gaping hole she feels can only be filled when she finds her father, Hunter Moon. Emma and her best friend, Liv, ditch a pre-wedding Napa getaway and head to San Francisco for an often funny paternal scavenger hunt. Fitzhenry’s plot is reminiscent of the 1996 Ben Stiller comedy flick Flirting with Disaster but lacks the heart and complexity that made the movie truly special. Through a series of too-convenient coincidences, Emma discovers secrets that rock the foundation of her past and threaten her future. Readers may buy the random run-in with a long-lost friend who reveals that fiance Sam might not be all he seems. And, OK, Liv’s ex-boyfriend could just happen to be at the same bar as Emma and Liv. But when a postcard for a Hunter Moon art show conveniently appears at just the right moment, debut novelist Fitzhenry slides quickly into eye-rolling territory. (To her credit, the author acknowledges the unlikeliness there by dubbing it “the Magic Postcard.”) It’s also hard to swallow that a character capable of such emotionally rich flashbacks to her childhood can be so one-dimensional in her analysis of present-day relationships. She's quick to label people as liars and cheats when there is clearly more nuance to situations. Still, Emma is easy to root for.

Despite some shortcomings, the story is a solid page-turner sprinkled with clever observations about the nature of romantic love.