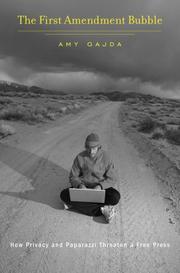 A lawyerly look at what threatens journalistic free speech liberties.

As a former journalist, Gajda (Law/Tulane Univ.; The Trials of Academe: The New Era of Campus Litigation, 2009) critiques and advises on matters of privacy and free speech with a keen journalistic eye. She explores the ways public scrutiny by news media (while protected under the guise of “newsworthiness”) tarnishes the notion of public privacy. As First Amendment constitutional protections for the press continue to expand, the “balance between privacy rights and public interests” becomes increasingly skewed. The author cites the current wave of ubiquitous social media, where personal information is willingly and willfully disseminated, as a prime instigator fueling the privacy rights debate. But at what point do First Amendment rights trump personal privacy rights? Her thoughtful discussion includes chapters juxtaposing journalism’s former golden age with the lax media standards of today’s paparazzi and shock reporters, where “push-the-envelope behavior has elevated privacy concerns to new levels.” Writing in concise, authoritative language, Gajda reiterates the significance of free speech, freedom of the press and the preservation of personal liberties within a complex debate that has become frustratingly blurred by legal ambiguities and loopholes. Fully utilizing (if overly reliant upon) pivotal court cases, she also highlights ruthless vigilante programs like To Catch a Predator and stories of misbehaving celebrities who have been scrutinized for wrongdoings by exploitative websites infamous for straddling ethical boundaries. Ultimately, Gajda writes, this is subject matter that will fester for decades as digital and social media erode the protective facade of personal privacy and evaporate the guidelines of what is considered newsworthy. She concludes with an appeal for change in how the law appropriates the First Amendment framework in both the private sector and within news media circles.

An eye-opening, relevant and cautionary book.