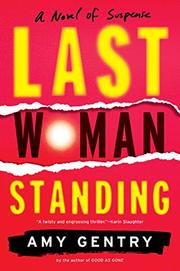 A #MeToo revenge thriller set in the world of stand-up comedy.

"Every woman I know has gone through something. Raped, assaulted, harassed, forced out of jobs. Trapped in abusive relationships. We talk about it with each other when the guys aren't around." Gentry's (Good as Gone, 2016) second novel is fired by the fury of characters who have taken all they can stand from the men in their professional and personal lives. Dana Diaz is the token Latina on the Austin, Texas, comedy scene, struggling along at depressing open mics until she manages to come in second at the annual Funniest Person in Austin contest—despite the fact that one of the first-round judges is a well-known comic who roofied and violated her Louis CK–style a few years earlier during an audition in Los Angeles. Right around the time of her win, Dana meets a fan named Amanda Dorn, a computer programmer who prods her to acknowledge the buried incidents of abuse in her past. She then involves Dana in a revenge pact, persuading her that they must take down each other’s abusers using any means necessary, from social media to assault and battery. Dana is surprised and a little horrified by how quickly she takes to the game, but many more surprises await her when she tries to escape Amanda's clutches and pursue her new career opportunities—and a long lost ex-boyfriend—in LA. The reveals come hard and fast, some a lot more believable than others, as the plot accelerates to its zesty ending.

Combining high-tech mayhem with good old-fashioned gore and violence, this extended fantasy of truths revealed and vengeance wreaked will be a satisfying read for those who share its righteous rage.