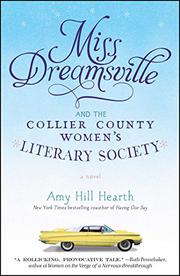 Hearth (Having Our Say: The Delany Sisters' First 100 Years, 1994, etc.) goes hog wild with lighthearted humor as she tackles some heavyweight issues in her debut novel.

It’s 1962, and Bostonians Jackie Hart and family have moved to Naples, Fla., a community that’s more country than a bowl of grits. She’s itching to make new friends and become involved in community activities, but of course, that’s easier said than done. Small Southern towns don’t exactly welcome transplanted Northerners with open arms. But Jackie’s an obstinate redhead who starts a reading club that attracts a stereotypical mixture of lovable misfits. The salon, as Jackie calls them, meets each week at the town library to discuss books and everything else under the hot Florida sun, and they quickly form a tight bond. There’s the librarian, the only member of the group who doesn’t carpool with them to the meetings; the gay man who’s the town’s lone Sears employee; a woman who secretly pens magazine articles about romance and sex; a young black maid with aspirations of a better life; an octogenarian who’s also a convicted murderer; and the narrator, a postal clerk who’s known around town as the Turtle Lady because she rescues snapping turtles before they can become roadkill. But Jackie’s the central force and the one who provides impetus for the group’s adventures. In addition to her job as a part-time copy editor at the local paper, she’s the anonymous voice of Miss Dreamsville, a sultry radio personality who lulls listeners to sleep in the late hours of the night. Everyone in town is consumed with finding out Miss Dreamsville’s true identity, but before a climatic showdown at the annual Swamp Buggy Festival, Jackie and the group tackle some very heavy situations, including local reactions to the Cuban missile crisis that result in a mistaken arrest and a run-in with the KKK. In fact, the characters experience/discuss/confront almost every social, political, religious, gender-sensitive and environmental issue that’s relevant in the South during the early ’60s, and each topic is couched in so many Southern colloquialisms and treated with such superficiality that it’s hard to take any of it too seriously—which is just as well.