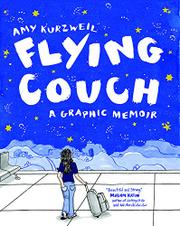 An ambitious debut by a graphic artist whose work succeeds on multiple levels, both visually and in terms of the textual narrative.

Toward the end of what is billed as a graphic memoir, Kurzweil (Writing and Comics/Parson School of Design) reflects, “the women in my family have certain stories to tell. Why does it feel like I’m not the protagonist of my own life?” And she isn’t of her own memoir, at least through one of the predominant strains intertwining in this narrative of the relationships among three generations of women in one family. The most dramatic is the one she relates of a time even before she and her mother were born: she shares her Jewish grandmother’s story, in her Bubbe’s words, of escaping from the Nazis in the Warsaw ghetto, living among gentiles as an orphan, and then marrying a Jewish man and reclaiming her identity. The author’s story encompasses that of her grandmother and also the author’s mother, a psychotherapist from whom her frequently anxious daughter learned, “psychology is a container. It grows that which would go wild. It civilizes.” Thus her mother’s perspective and the typical mother-daughter tensions become integral to the author’s quest for identity. What kind of daughter is she? What kind of Jew? What kind of artist? The drawings are excellent, including maps that provide the psychological dimension of Kurzweil’s interior life, dreamscapes, and travels, including study abroad in Israel. She ultimately makes a life of her own in Brooklyn, as an artist, with a series of apartments, where “to order the objects of real life, the things I can feel and name, reminds me that my life is my own, and it has not, although it might seem otherwise, been pre-written.”

A debut that enriches and extends the potential of graphic narrative.