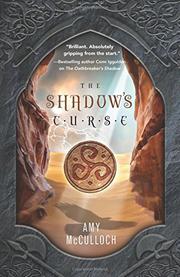 A lost prince and his ladylove must defeat the tyrant rampaging over the steppes with an army of enslaved spirits in this sequel to The Oathbreaker’s Shadow (2015).

Raim is haunted by the spirit of his best friend, Khareh—a spirit that appeared when Raim accidentally broke an oath made by another, leaving him magically marked and exiled from his nomadic tribe as an oathbreaker. Khareh yet lives, but with the best part of himself lost in the spirit, his ambition has become megalomania. Not content to be khan of his tribe alone, Khareh aims to join all the northern nomads into one massive khanate. Raim seeks control over his spirit but also yearns to rescue Wadi, the dark-skinned desert girl to whom he's given his heart. Wadi is Khareh's captive, and she is more than capable of freeing herself from the cruel young khan; nevertheless she must stay a captive. It's her destiny to make a king of Raim, she learns from a blind seer in one of the stalest tropes of superpowered disability. Raim, Khareh, and Wadi travel all over the steppes of Darhan, giving a solid glimpse of this fantasy world roughly based on the lives of Mongolian nomads. A dense narrative of tiny chapters with shifting points of view leaves little time to become invested in each character's journey.

Though it’s a bit of a slog, readers of Book 1 will find it worth the time for its unexpected conclusion