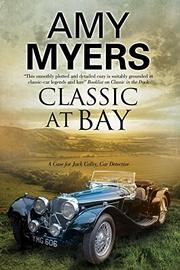 A simple job turns into a tricky case for Jack Colby, Car Detective.

Danny Carter, manager of the Jaguar collection Adora Ferne keeps in the Lair, has engaged Jack to persuade Gabriel Allyn, Earl of Storrington, to sell his 1937 SS 100 2.4 litre Jaguar to Adora. His Lordship promptly turns Jack down in no uncertain terms. Adora is a legendary singer who’s received 12 classic Jaguars as gifts from lovers and husbands and is determined to add a 13th to her collection. She insists that the unwilling Danny show Jack the collection installed in the Lair. Each magnificent vehicle is displayed with a picture of Adora and the car’s donor. Adora tells Jack that Danny will explain another job she wants done. She’s received threatening letters about burning down the Lair and killing her. When Danny is murdered in the Lair, Jack, who often works with the police on cases involving cars (Classic in the Pits, 2014, etc.), is hired to investigate. His inquiries lead him back to the Three Parrots, a club where Adora sang 50 years ago. Many of her husbands and lovers were involved with the club, which closed soon after the unsolved murder of Lance Benny, a race-car driver cast as Adora’s next husband, who had just departed from the club before his body was found nearby. The son and daughter from two of Adora’s marriages are appalled to learn that she planned to leave everything to Danny, who, it turns out, was collecting money every year from the former lovers in the guise of funding a charitable foundation. Jack’s conviction that the answer lies in the past is bolstered when another of Adora’s former admirers is found murdered in the Lair.

Myers’ eighth in the Jack Colby series, one of her best, has a surfeit of suspects, a complicated back story filled with quirky characters, and a surprise ending.