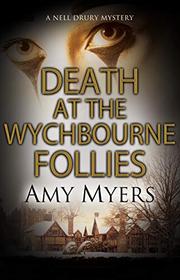 DEATH AT THE WYCHBOURNE FOLLIES

A festive gathering of actors ends in disaster.

When Lord and Lady Ansley invite a group of theatrical types to Wychbourne Court to give a performance that will benefit charity, Lady Ansley, herself a former Gaiety Theatre star, fails to predict how much awkwardness will arise among several prima donnas who aren’t friends despite, or because of, their common interests. Growing ever more nervous, Lady Ansley counts on her chef, Nell Drury, a purveyor of magnificent meals and a fountain of strength, and Tobias St. John Rocke, a keeper of secrets and comforter to the theater tribe, to smooth things over. In an awkward moment, Lady Ansley lets slip the name of Mary Ann Darling, an actress she replaced but never met before the woman vanished and turned up dead several years later, presumably the victim of an unsolved murder. Invoking a shadow from the past only increases the squabbling among the guests, who are not all happy about the production’s being moved to the local inn and opened to the public. After the show, Lady Ansley discovers that she’s lost a valuable brooch. When Nell and Lord Ansley return to the inn to search for it, they discover the bloody body of Tobias dead near the village church. Sharp-eyed Nell can’t help but notice evidence being covered over by snow. Scotland Yard sends Inspector Alexander Melbray, whom Nell had helped before (Dancing with Death, 2017) and thought of as more than a passing acquaintance. So she’s especially put out by Melbray’s cold treatment of her. In between whipping up dinners for the guests, Nell finds time to comfort Lady Ansley and hunt for clues to Rocke’s murder. Although the police arrest a local man, Melbray’s clearly not satisfied until the answer to several connected murders is revealed by some shocking secrets from the past.

Plenty of period detail and shoals of red herrings keep the story moving as the clever heroine seeks answers and a better relationship with the handsome inspector.