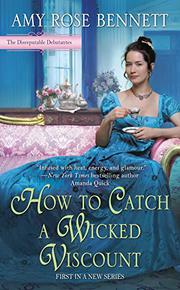 HOW TO CATCH A WICKED VISCOUNT

Sophie Brightwell’s chance at a society marriage was dashed years ago, after she and her school friends were found by their headmistress in the midst of drinking brandy, smoking cigarillos, and reading books like Memoirs of a Woman of Pleasure. But she’s remained friends with all the members of the Society for Enlightened Young Women despite their mutual scandal, and her friend Lady Charlotte Hastings still has hopes of finding Sophie a husband to help her family's fortunes. Calling the society back together, Charlie decides they should all look for eligible rakehells to marry—after all, “rakes sometimes turn into the very best husbands.” Little does she know that Sophie already has her heart set on one: Charlie’s brother, Nathaniel, Viscount Malverne. Nate, as notorious a rake as the beau monde has seen, is attracted to her as well but knows he should leave his sister’s friend alone, and after an accidental indiscretion, he agrees to help introduce her to bachelors meeting her specifications. But as he watches her flirt with other men, he realizes he wants her more than he wants to admit—and both will have to decide if potential ruin is worth the plunge. The first book in Bennett’s new Disreptuable Debutantes series sets up and delivers on an appealing premise: clever Regency heroines willing to sacrifice their reputations for disreputable love matches. Sophie’s intelligence and innocent lust are charming, and Nate is a pitch-perfect rake. Although their happily-ever-after is never in doubt—there’s little suspense, though a lot of sizzle, in this plot—readers will enjoy this expertly executed Regency with likable characters.

A well-written start to a historical romance series full of rakes and the women who love them.