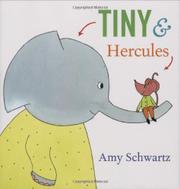 This friendly cousin of Laura Vaccaro Seeger’s Dog and Bear (2007) is filled with understated humor and even-tempered loyalty. Tiny, a pleasantly round, gray elephant, and Hercules, a reddish-brown mouse, support each other through five stories. When Tiny tries ice skating but “things [don’t] go quite as planned” (as the narration calmly describes his swooping collapses), Hercules lays claim to his name by sailing across the ice holding Tiny aloft. They alternate as helper and helpee, dedicated to each other’s feelings. The sweetest example occurs when an agreement to knit each other sweaters goes awry due to the diminutive size of Hercules’s knitting needles. Tiny doesn’t let his friend feel bad for even a jiffy; he simply places the miniscule sweater-attempt on his forehead, gracefully commenting, “This is the nicest hat I’ve ever had.” Plenty of serene white space makes every page feel relaxed and open. Medium-saturated hues fill in fine, black outlines, and some of Tiny’s postures are priceless. (Picture book. 3-6)