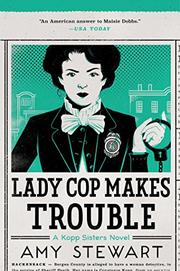 From the Kopp Sisters series, volume 2

When we reconnect with Constance in the summer of 1915, she's casually toting a revolver and collaring a male perp, as strong-minded and strong-armed as ever. Constance loves her new job and is grateful to liberal Sheriff Heath for making it possible for her to support her sister, Norma, and 18-year-old Fleurette, who thinks she's their sister but is in fact Constance’s illegitimate daughter. It’s a grievous disappointment to learn that the law enabling women to become police officers doesn’t necessarily apply to sheriff’s deputies and that until Sheriff Heath finds legal precedent for hiring Constance, she’s stuck in a stopgap position as matron at the local jail. Summoned to Hackensack Hospital to translate for Herman von Matthesius, a German-speaking prisoner taken there for allegedly suffering dire symptoms, Constance is at first glad for the excitement but then mortified when he slips away while she guards his door. Not only has she justified the sexist slurs of her former male colleagues, but her slip-up could send Sheriff Heath to jail. Constance determines to track down von Matthesius herself, giving straight-laced Mrs. Heath one more reason to disapprove of her, alongside the possibly accurate suspicion that the lady officer’s feelings for the sheriff are warmer than professional. As was the case in Girl Waits with Gun, plot details are less compelling than our rooting interest in Constance out-detecting all the men (which she does) and in the evocative period atmosphere, this time centered on the mean streets of early-20th-century New York City, where von Matthesius and his confederates lurk. Sharp-tongued Norma and pretty, stage-struck Fleurette head a vivid supporting cast, and the von Matthesius case and a subordinate mystery are satisfyingly wrapped up to Constance’s credit.

Smart, atmospheric fun, with enough loose ends left dangling to assure fans there will be more entries in this enjoyable series.