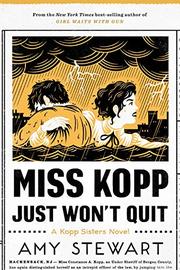 From the Kopp Sisters series, volume 4

Sheriff Heath, Constance Kopp’s liberal-minded mentor and defender at the Hackensack County Jail, is reluctantly running for Congress because he’s term-limited by New Jersey law. Odious John Courter, running to succeed Heath, attacks his record at every opportunity, including most particularly the “Troublesome Lady Policeman Who Frees Lunatics from Asylum.” The “lunatic” is Anna Kayser, committed by her husband for the fourth time on what seem to Deputy Kopp very flimsy grounds. Indeed, she soon learns that Mr. Kayser has his wife put away every time he wants to play house with a new girlfriend. Constance gets Anna a lawyer, one of the many feisty women with whom Stewart’s unabashedly feminist series is populated, and justice might even triumph in this case. The main plot concerns the increasingly ugly election, and Constance probably won’t be the only one who flinches when Sheriff Heath optimistically tells her, “A man who does nothing but cast out hate and blame couldn’t possibly be elected to office.” As before, Stewart bases much of the story on actual events (carefully documented in endnotes), with generous fictional embroidery to elaborate the stories of Constance’s Popular Science–loving sister, Norma, currently working to convince the Army it needs carrier pigeons, and their putative baby sister (actually Constance’s illegitimate daughter), Fleurette, who has aspirations as a performer but at the moment is a seamstress for a Fort Lee movie studio. The looming threat of World War I adds to the dark tone, but the military training camp at Plattsburg offers all three Kopp women a fresh start after the dispiriting election results. Constance may just have turned 40, but this tough-minded, generous-hearted believer in second chances and equal rights for women looks set for many more adventures.

A welcome addition to this sui generis series, always fresh thanks to its vividly imagined characters firmly grounded in historical fact.