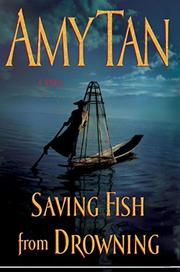 Tan’s ambitious fifth novel is a ghost’s story (though not a ghost story), about an American tourist party’s ordeal in the Southeast Asian jungles of Myanmar (formerly Burma).

Its narrator is Bibi Chen (whose relation to the story’s complex provenance is discussed in a brief prefatory note): a 60-ish California art collector/dealer and sometime travel guide, whose unexplained violent death limits her to joining the members of an American art tour “in spirit” only. She’s a major presence, however, among such varied traveling companions as Chinese-American matron Marlena Chu and her preadolescent daughter Esmé; biologist Roxanne Scarangello and her younger husband Dwight Massey (a behavioral psychologist); a florist who produces specially bred tropical plants and his teenaged son, an ardently liberal rich girl and her sexy lover, a gay designer pressed into service as de facto tour master, and several others—the most interesting of whom is TV celebrity dog-trainer Harry Bailley (who has eyes for Marlena, and whose name slyly alludes to that earlier portrayal of motley travelers who discover one another’s unbuttoned humanity: Chaucer’s Canterbury Tales). The strength here is Tan’s clever plot, which takes off when 11 of the dozen tourists (sans Harry, who’s ill) enter the jungle, cross a rope bridge that subsequently collapses and find themselves stranded among a “renegade ethnic tribe” who mistake 15-year-old Rupert Moffett for a “god” capable of rendering them invisible to Myanmar’s brutal military government. Their disappearance becomes an international cause célèbre, cultural misunderstandings entangle and multiply, and some fancy narrative footwork brings the tale to a richly ironic conclusion. Alas, Tan (The Bonesetter’s Daughter, 2001, etc.) offers much more—ongoing discursive commentary from Bibi’s post-mortem perspective, and scads of historical and ethnographic detail about Burma’s storied past and Myanmar’s savage present. The author’s research ultimately smothers her story and characters.

A pity, because this vividly imagined tale might very well have been her best yet.