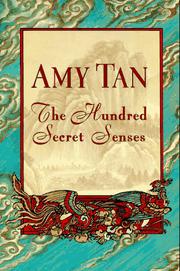 Tan again revisits the rich intersection of Chinese and American female sensibilities (The Joy Luck Club, 1989; The Kitchen God's Wife, 1991), this time layering her trademark home truths on the fragile foundation of an episodic century-old ghost story. Olivia is three years old when her dying father reveals that she has a half-sister back in his native China and asks her Idaho-born mother to retrieve her. Two years later, Kwan arrives to join the family in San Francisco. She's a noisy, affectionate teen who makes Olivia promise to keep her secret—namely, that she has "yin eyes" that allow her to see and communicate with the dead. Despite her pledge, Olivia tattles to her mother that the new sister stays up all night talking to—and telling her about—ghosts, at which point Kwan is promptly packed off for a brief stay at a mental institution. Now Kwan's almost 50, and still a boisterously loving, relentlessly intrusive presence in Olivia's life. She won't accept that Olivia's marriage to Simon is over and finally cajoles the estranged couple into accompanying her back to China. In her home village, then, the ghost stories Kwan's been telling for decades surge toward their climax—the love-interrupting murders of Kwan's past-life self and of her beloved American friend Miss Banner. Forced to share a bed, Olivia and Simon briefly reconcile, but then he disappears, leaving Olivia to fret over his fate while she also begins grudgingly to accept that she too remembers being killed among these cave-studded mountains. Despite Tan's supple prose and low-key humor, the Miss Banner strain of the story is overlong and uninvolving, and the inevitable then-vs.-now parallels feel more contrived than evocative. Still, fans should warm to the loving depiction of Kwan's old-world eccentricities and to the homespun precision with which the sisters' complex bond is illuminated.