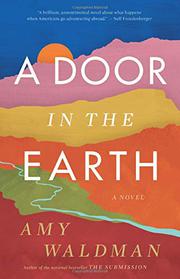 A DOOR IN THE EARTH

A young Afghan American finds life in a remote Afghan village to be very different from the narrative she had been fed back home in this novel from a former New York Times Afghanistan correspondent.

Given that the U.S. has been keen to win the battle for hearts and minds in Afghanistan since 9/11, Americans will willingly lap up any story that sheds the U.S.–Afghanistan relationship in a positive light. Dr. Gideon Crane’s wildly successful memoir, Mother Afghanistan, fits the bill. The (fictional) bestseller narrates the tale of Crane’s efforts to do good in a poverty-stricken village. Crane’s best intentions didn’t amount to much as he helplessly watched Fereshta, a young mother, die from complications in childbirth. In a sweeping gesture of goodwill, years later, Crane built a hospital in the village in her honor, a monument that drew thousands of donations from well-meaning Americans trying to justify their country’s actions. Parveen Shamsa, a newly minted college graduate, is drawn in by Crane’s account and travels to the same village to exercise her medical anthropological skills and connect with her Afghan roots. To her dismay, Parveen finds gaping holes in Crane’s narrative and slowly realizes that “the village was a backdrop against which Americans played out their fantasies of benevolence or self-transformation or, more recently, control.” Worse, Crane’s memoir also galvanizes the U.S. Army to deliver its own brand of feel-good medicine to the town, with unsurprisingly tragic consequences. Through a kaleidoscope of shifting perspectives—from Parveen's host family to the village elderman, the gynecologist who can only visit weekly, and the military top brass who bring the war to town—Waldman (The Submission, 2011) delivers a breathtaking and achingly nuanced examination of the grays in a landscape where black and white answers have long been the only currency.

A bone-chilling takedown of America’s misguided use of soft power.