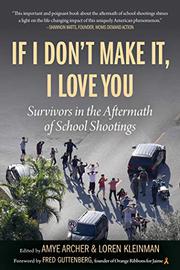 IF I DON'T MAKE IT, I LOVE YOU

Survivors in the Aftermath of School Shootings

Agonizing accounts of school shootings, amply showing that “you don’t have to be a combat veteran to be exposed to violent trauma in America.”

Co-editors Archer (Fat Girl, Skinny, 2016) and Kleinman (The Dark Cave Between My Ribs, 2014) gather all manner of writing—firsthand accounts, remembrances, interviews, even cartoons—about school shootings in the U.S. dating back to 1966. The result is an important and horrifyingly thick anthology of mass murders that have occurred at elementary, middle, and high schools as well as colleges. For each of the 21 tragedies, one of the editors contributes an introduction, mentions the perpetrators, lists the names of the murdered individuals, and then shares one or more anguished contributions by those directly affected. Eternal optimists may view the anthology as a testament to human resilience; more pessimistic readers will see it as a necessarily searing indictment of the never-ending lethal gun culture in the U.S. Whatever the reader’s disposition, the accumulated impact makes for powerful, painful reading. Some of the massacres will be well remembered by most readers—e.g., Parkland, Columbine, Sandy Hook, Virginia Tech, and Columbine—while others may have been forgotten. The co-editors present the events in reverse chronological order, which means the final chapter is set at the University of Texas on Aug. 1, 1966, when Charles Whitman fired bullets from a campus tower, murdering 15 students, staff, tower visitors, and first responders. The final section, “Coordinating Trauma,” offers glimpses of hope, as “activists and survivor coordinators recount their paths to supporting survivors in the aftermath of school shootings.” Taken together, the pieces in this often heartbreaking collection make clear that policymakers reacting to each slaughter with “thoughts and prayers” will never suffice.

Highly difficult to read in one sitting, but we must not look away.