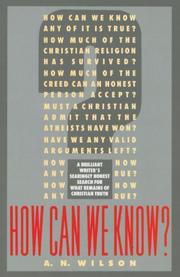 HOW CAN WE KNOW?

An ex-Catholic and ex-ex-Anglican works his way back Christianity in this astringently honest testimonial. Wilson is a young Englishman who has written so-so novels, a weak book on Milton, and a fine one on Hilaire Belloc. Though he has done some formal study of theology, his father in the faith is actually that arch-heretic and agonized demythologizer, Leo Tolstoy: ""Tolstoy rescued Christ from the deadening clutch of the clergy and gave him back to the world. He rescued above all the words of Christ. . ."" Those words boil down to five ideals: universal love, perfect chastity, living in the present and ignoring the future, non-violence, and love of enemies. These demands lay a staggering burden on the would-be Christian, and Tolstoy was the first to acknowledge his repeated failures to bear it. But, like his great Russian forebear, Wilson found himself stunned by the force of the Sermon on the Mount and Jesus' other sayings and confronted by a live personal presence. Unlike Tolstoy, Wilson was unwilling to limit Christianity to a mystical-heroic moral teaching, and so he returned to the Church of England--for its doctrinal flexibility, its lack of hubris, and, not incidentally, the beauty of its prayerbook, services, and buildings. Having already wrestled with agnosticism and felt the sting of its strictures against the Bible, the Virgin Birth, the Resurrection, etc., Wilson still retains a strong fideistic streak: we can know next to nothing with dogmatic certitude, but going to church and receiving the Eucharist makes deep pragmatic sense to Wilson, so he does it. Less athletically rationalistic than C.S. Lewis, much less intimately revealing than the classic born-again convert, Wilson conveys real religious conviction in this taut, quietly appealing ""confession.