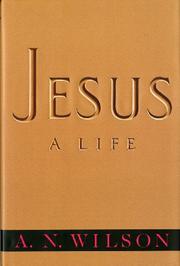 The prolific novelist (Daughters of Albion, 1991, etc.) and biographer (C.S. Lewis, 1990, etc.) turns his attention to the historical Jesus, a biographical subject out of fashion among contemporary theologians. The result is a surprisingly dispassionate, respectfully skeptical study that makes the best biblical scholarship accessible to general readers. At once cautious and speculative, Wilson's book is not a biography in any modern sense of the term, since there is little we know about Jesus outside of the Gospels. And the Gospels are, of course, narratives ``of a high imaginative order'' that have to be read critically with their historical intentions in mind. Following recent Christologists, Wilson restores the figure of Jesus to his Jewish roots, and views him as a Galilean hasid, or holy man, who preached his message of love and forgiveness to his fellow Jews. After his death, three fairly distinct strands of Christianity developed: the Temple-based, Jewish followers of Jesus in Jerusalem; the anti-institutional, anti-ritualistic celebration of faith embodied in the Gospel of John; and the Christian religion as conceived by Paul and developed both in his many epistles and in the Synoptic Gospels, which were written, most likely, under his influence. This last strain, addressed to Gentiles more than Jews, came to dominate Western ways of worshipping Jesus for centuries. Synthesizing textual and archaeological evidence with plain common sense, Wilson rejects any effort to systematize Jesus, offering an abundance of contradictions and inconsistencies. But this doesn't stop him from admiring the radicalism of what he sees as Jesus' fundamental massage—that God loves and forgives sinners—a dangerous notion for a historical people dedicated to formal worship and good works. Finally, though, in Wilson's view, it's Jesus' very inexactness that explains his abiding transcendent appeal. A formidable challenge to believers in Jesus' divinity, Wilson's eminently readable book also serves as an excellent introduction to the New Testament.