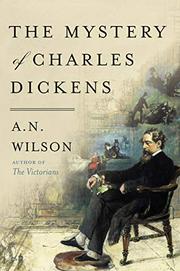 THE MYSTERY OF CHARLES DICKENS

The mystery of the iconic novelist’s divided self as beautifully parsed by accomplished English biographer and novelist Wilson.

In this utterly satisfying investigative narrative, the author moves from Dickens’ death in 1870 back through his career and childhood trauma being sent to work in a blacking factory at age 12. It’s clear that Wilson fully comprehends the many complexities of the wily novelist, public performer, and secret lover. Beginning with the mystery of his death, the author re-creates the last day of the famous novelist’s life as he made the habitual hour’s journey from his home at Gad’s Hill, Kent, to his mistress’s house in Peckham (places have major significance in Dickens’ work). There, he suffered a seizure and was returned to his home to die a respectable death, surrounded by his estranged wife—tortured, as Wilson calls her—and some of his many adult children. Wilson gradually, engagingly unravels the circumstances surrounding his death. “Dickens was good at dying,” he writes. “If you want a good death, go to the novels of Dickens.” The novelist had been consumed by his love affair with the former actress Nelly Ternan for the previous 13 years and had bought the house where she lived with her mother and sisters. Just that morning, Dickens had been working toward the conclusion of The Mystery of Edwin Drood, a book that was destined to be left incomplete, and was saturated with a sense of raging passion for a young, unobtainable girl. (Wilson ably dispels the myth that Dickens did not write about sex.) Wilson writes with precision, intuition, and enormous compassion for Dickens’ senses of social justice and outrage, especially regarding children in the mercilessly materialist Victorian era. The author also charmingly conveys his own early enchantment with Dickens’ books.

A marvelous exploration by an author steeped in the craft of his subject’s elastic, elusive work.