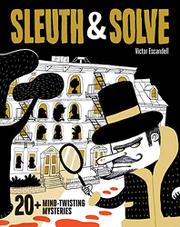 Captions and cartoon drawings offer clues to the solutions of 23 brainteasers, from murders to missing exam questions, in this Spanish import.

Rated (arbitrarily) for difficulty and categorized as needing either “logic” or “imagination” to solve, the haphazardly arranged scenarios each feature a brief setup, two to 10 numbered duotone line drawings of participants (or, more often, suspects) with brief descriptive notes, and a solution hidden behind a glued-on flap. Along with classic posers such as the one about getting a dog, a chicken, and a bag of corn safely across a river, young Sherlocks are tasked with figuring out why only four of five men heading for a cemetery get wet in a sudden shower, how only one of two “mobsters” sharing iced drinks is poisoned, how young Katia is supposed to get a key out of a bottle without breaking glass or removing the cork, and, in several felonious situations, whose alibi doesn’t hold up. A few solutions will be greased with prior knowledge, but most are self-contained and well enough supplied with verbal or visual clues to require only a moment’s head-scratching. The ending comes on abruptly; Gallo compensates, at least in part, by opening with suggestions for turning these exercises into a family or team game and keeping score. Escandell’s caricatured human figures represent uniformly as white as the paper they are printed on.

Nourishing fare for budding Encyclopedia Browns and even preteen Poirots.