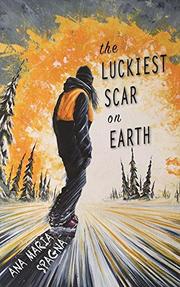 THE LUCKIEST SCAR ON EARTH

A teen snowboarder reconnects with her estranged father, an ardent environmentalist.

As the book opens, Charlotte seems to have given up on snowboarding as she describes giving away all her expensive gear, but she's soon back at it (and bemoaning the absence of equipment). Charlotte and her mother, both white, have moved from the Rockies to the Cascades due to her mother’s layoff. The intent is to reconnect Charlotte with her father, Larry, who bears the titular scar and has taken a job at the local ski resort. The alcoholism that separated her parents is no longer an issue, and as Charlotte and Larry share backcountry adventures, the environmental passions Larry currently holds become more apparent. The book’s environmental slant grows through a new friendship with Rose, whose success at school shares equal prominence with her Mexican-American heritage. Her father runs an apple orchard and is almost as fierce as Larry about preserving the pristine wilderness of the Cascades. Spagna incorporates discussion of the environmental impact development fairly smoothly, but the same cannot be said for her plotting. Following her renewed interest in boarding, Charlotte again seems to be abandoning the sport just as she cements a national ranking.

It’s delightful to see a female snowboarder as narrator, and readers who can get past the book’s unevenness will find distinctive characters and an underrepresented subject