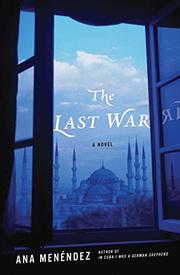 Suspicions regarding her absent husband lead a news photographer into meditation on self-knowledge and conflict in Menéndez’s latest (Loving Che, 2004, etc.).

Short, poetic, atmospheric and introspective, the narrative follows a Dominican-American nicknamed Flash as she descends into isolation and uncertainty after receiving a letter signed “Mira” (she doesn’t know any one named Mira) that casually assumes she knows all about her husband Brando’s current affair and previous adulteries. Flash and Brando—aka Wonderboy for his blond good looks and preppy aura—have spent a decade following wars around the world as a journalist/photographer team. “The papers he worked for then acted as if they were doing us a favor, allowing their boy wonder to travel with the wife,” she notes sardonically. Currently he is in Baghdad, and Flash is waiting for accreditation in Istanbul. Even before the poisonous letter arrives she senses her reluctance to join him and also detects signs that the marriage may be fragile. A woman in a black abaya who seems to be following Flash turns out to be Alexandra, an old colleague from other chapters in her nomadic married life. Alexandra offers double-edged friendship while Flash wanders the city, drinks, decides to leave, changes her mind and is then overtaken by events. Brando remains an offstage presence, his phone calls variously practical, needy and ultimately angry in response to Flash’s cool tone. Only years later does she come fully to accept that the layers of betrayal, delusion and loss in her marriage correspond to a larger world of eternal turmoil.

A quietly piercing cultural and philosophical think-piece, comparable in its low-key, allusive moodiness to a European art-house movie.