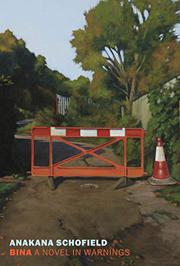 A Novel in Warnings

An elderly woman in western Ireland holds up her life as a cautionary tale.

Partway through the tale told by Schofield’s garrulous 74-year-old narrator, she reflects on what her story could be if she were a woman with plenty of time left to her: “She’d lace up paragraphs that would absorb you and you’d believe her, because you’re easy this way. I am not that woman. I’m not easy.” She’s right: Bina and her story are anything but easy. The story of her later life unspools, often meandering down the page in broken lines like poetry (an effect achieved because she’s partly writing on the backs of receipts and bills) and including footnotes for digressions. Bina is especially concerned with warning readers not to end up as she did after helping a man—the bullying Eddie—who ruined her life the day he landed in a ditch on her property after a motorcycle accident. She tells of her unwitting role as a kind of counterculture icon to a group of young radicals she calls “the Crusties” after being jailed for hitting an airplane with a hammer during a protest. (She was thinking of Eddie.) And she speaks of her secret work with a dying-with-dignity group and the adjacent grief it brings into her life, especially when a much-loved friend is involved. But the plot, emerging in fits and starts, is really beside the point: Schofield pulls off such a virtuosic feat of voice that Bina’s utterances, by turns aphoristic and rambling, grief-soaked and mordantly funny, haul the reader through the book, as immersive as being trapped inside her rural kitchen with the kettle on.

A masterwork that should cement Bina (and Schofield) as one of the great voices in recent fiction.