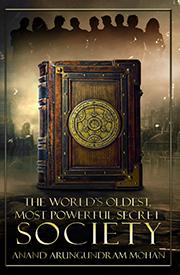 In Arungundram Mohan’s (The Under-Ordinary Life of Mangamma Uppertoe English, 2016) middle-grade fantasy novel, a group of children search for a magic book to bring their friend back to life.

In the India of 261 B.C.E., after a particularly brutal battle to subdue a neighboring state, King Ashoka declares that he’s done with war. Peace reigns throughout his empire, and Ashoka gathers together nine learned men to form a secret society. He tasks them with writing books on various types of potentially destructive power, including alchemy, time travel, and communication with alien life, but he also orders them to hide these books, once written, lest they fall into the hands of those who would disrupt the peace. Thousands of years later, in 2006, nine children are born on the same day in an apartment building called River Falls near the city of Chennai in southern India. They grow up as close friends, doing everything together until, one day, Gopal, one of them, is killed by an errant cricket ball. The friends are grief-stricken until Leela, another member of the group, meets an old man who tells her a story about the hidden books of power—which, he says, could possibly bring someone back from the dead. Only those who are worthy can find the books; do Leela and her friends have what it takes? The premise of Arungundram Mohan’s story is wonderfully imaginative and inviting, mixing the history and mythology of ancient South Asia with a colorful portrait of modern India. However, the writing doesn’t rise to the occasion, as it’s full of awkward syntax (“The groans from the soldiers were the response to this announcement, but their discipline made them keep their calm and not cause a riot”) and odd details, as when Arungundram Mohan mentions that Gopal was killed when the cricket ball hit him in his genitals. More polished narration and more fully developed characters would have made this a highly readable middle-grade adventure.