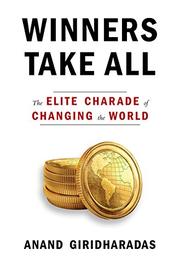 The Elite Charade of Changing the World

Give a hungry man a fish, and you get to pat yourself on the back—and take a tax deduction.

It’s a matter of some irony, John Steinbeck once observed of the robber barons of the Gilded Age, that they spent the first two-thirds of their lives looting the public only to spend the last third giving the money away. Now, writes political analyst and journalist Giridharadas (The True American: Murder and Mercy in Texas, 2014, etc.), the global financial elite has reinterpreted Andrew Carnegie’s view that it’s good for society for capitalists to give something back to a new formula: It’s good for business to do so when the time is right, but not otherwise. Moreover, business has co-opted philanthropy, such that any “world-changing” efforts come with a proviso: “if you really want to change the world, you must rely on the techniques, resources, and personnel of capitalism.” Philanthropic initiatives to effect social change are no longer the province of public life but instead are private and voluntary, in keeping with free market individualism. Naturally, there’s a layer of consultants and in-house vice presidents to manage all this largess, which hinges on the premise that things aren’t so bad and just need to be nudged along. The author memorably calls this process “Pinkering,” after the ameliorist-minded psychologist Steven Pinker. “It beamed out so many thoughts about why the world was getting better in recent years,” Giridharadas writes of one initiative, “that its antennae failed to detect all the incoming transmissions about all the people whose lives were not improving, who didn’t care to be Pinkered because they knew what they were seeing.” So what’s so bad about private giving? Answers the author, when a society elects to help, it expresses democratic values with an eye to equality, while private giving is inherently unequal, a power relation between “the giver and the taker, the helper and the helped, the donor and the recipient.”

A provocative critique of the kind of modern, feel-good giving that addresses symptoms and not causes.