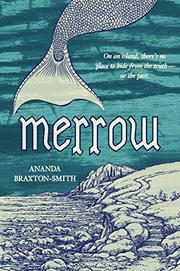 Neen was almost 3 when her mother, Ven, disappeared, but a decade later she still has more questions than answers; grim Auntie Ushag’s tight-lipped, but some say Ven had merrow blood and returned to the sea.

Carrick’s inhabitants have endured famines and Viking raiders. With the millennium approaching, proselytizing Christians preach redemption along with terrifying warnings of what will befall those who remain pagan. Some islanders, such as Ma Slevin and her blind son, Scully, hedge their bets and hang onto the old faith, too, with its rich tapestry of myth and folklore about Others and merrows. Despite their prickly relationship, Neen and Ushag share the hard labor of fishing, hunting, cleaning their catch, curing hides. They make and mend nets, gather honey and beeswax, scavenge beaches for wooden spars, rusty bolts, and occasional treasures from shipwrecks, all described with poetic precision. Restless, Neen pesters Ushag for answers—what was her mother like? “Just like you,” she’s told, which only deepens the mystery. Neen too loves the sea; like Ven’s, her skin gets scaly in the summer heat. As storms and earthquakes reshape the island, Neen recounts her quest for proof of her mother’s nature and therefore her own. Though she sprinkles her account with Manx, Neen’s no tour guide to the Middle Ages but an authentic Everyteen whose hard, beautiful world readers will recognize.

A sparkling paean to the stories we tell—plain and embroidered, fantastical, amazing, true—that get us through the night.