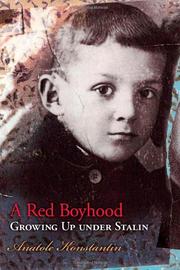 Growing Up Under Stalin

A boy’s-eye view of life during wartime—first the Soviet Union’s vicious internal struggles under Stalin and then its horrific ordeal after the Germans invaded in 1941.

Konstantin begins his memoir in dramatic fashion, recalling the night of April 17, 1938, when his father was taken away by the Soviet secret police and never seen again in their little town in the Ukraine. The early passages of the book do a fine job of explaining the climate in which such an incident could occur; Konstantin describes an Orwellian regime full of furtive police activities, mysterious disappearances and a terrorized populace. What makes Konstantin’s recollections so captivating is his ability to effectively divide the text between small details vividly rendered, such as a trip to the movie theater, and the larger story of a global political and military struggle. Despite the upheavals that roiled his childhood, the author somehow managed to get a decent education; he refers frequently to inspirational teachers and to devouring books ranging from The Grapes of Wrath to Das Kapital. But these moments of enlightenment in Konstantin’s young life were tempered by the unbearable wartime conditions; often, as he left school for the day, he saw corpses piled high on wagons to be carted away. His mother married a Polish refugee in 1944, and they were able to return with him to Poland in 1945, happy to escape the “cursed” Soviet Union. But the Soviets soon consolidated their grip on Poland, and the family fled west, finally winding up in a UN refugee camp in Germany. As a displaced person, Konstantin qualified for free tuition at a local university, and after three more years of struggle was finally able to emigrate to “the land of my dreams”—America.

Uneven, but full of engaging details about a tumultuous period in world history.