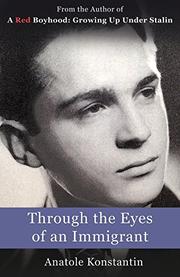 Through the Eyes of an Immigrant

A refugee from the Soviet Union settles in the United States and hustles to make a life there in this memoir.

In 1949, after fleeing Ukraine and attending a university in Germany, Konstantin (A Red Boyhood—Growing Up Under Stalin, 2008) landed in Boston. He had only $22 to his name, warily hidden in the lining of his pants, and the support of his sponsor, the New York Association for New Americans. It wasn’t easy for him to find work as a mechanical engineer, so he barely made ends meet by leapfrogging from one menial job to another. He finally found more promising employment in Ohio and was eventually able, in 1969 at the age of 40, to start his own business with his brother, Bill. Along the way, he fell in love with a woman named Rosaria Puccio, and they married and had children. The author negotiated their religious differences—he’s decidedly secular and she was raised Catholic—with the help of the Ethical Culture Society, a humanist philosophical group that emphasizes the shared moral ground of the world’s major theologies. Konstantin, an avid reader and lifelong student, later earned a master’s degree from Columbia University in industrial management. In this book, he constantly situates his own personal experience in the context of geopolitical affairs, which largely meant the dramatic unfolding of the Cold War. He also includes astute discussions of American politics, never shying away from analysis of major political figures, such as presidents Dwight D. Eisenhower and John F. Kennedy, or watershed events, such as the Bay of Pigs and Watergate. One recurrent theme is his exasperation with Western credulity: “I was still haunted by the question of why so many Americans and European intellectuals…still believed the Soviet propaganda.” This is the second installment of the author’s memoirs, and as in many autobiographies, there’s plenty of space devoted to quotidian affairs—the details of vacations, personal financial matters, and the like. These discussions will largely interest those who know the author personally, particularly his family members. However, his discussions of communism’s unraveling, and of its intellectual attraction to Westerners, provide a stirring testimony of real, though sometimes-ignored, global atrocities. It establishes Konstantin as an extraordinary moral witness who faithfully recorded depredations that man visited upon his fellow man in the name of ideology.