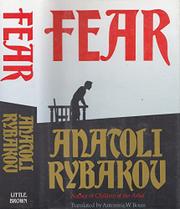 Vol. II of the Arbat Trilogy

The years of the Yezhov terror, the Great Purge of the Thirties that began with the Zinoviev/Kamenev show trials, occupy the second volume of Rybakov's Arbat Trilogy (Children of the Arbat, 1988)—and the heavy hand of the book seems in keeping with the tenor of its story: a time in Stalin's Russia when betrayal was so disseminated that it became almost unconscious; when by merely breathing, or so it seemed, you could destroy yourself or someone else. Presiding over this mass terror is the chief paranoic himself, Stalin, whose thought processes Rybakov tries to follow (really successfully in only one section—where Stalin has an aide destroyed for the crime of watching Stalin clumsily handle a book: a crime that spirals exponentially in the mad leader's mind). As a novelist, Rybakov is pedestrian, and least convincing are the ongoing small-fish characters of the trilogy—Sasha the student, just released from Siberia when this story begins, trying to make his way back to Moscow; Sharok, the eager up-and-coming NKVD-er; Varya, Sasha's lover. History streams around these characters, but a reader's not quickened by them. Most lively here is the sense of Rybakov's effortfulness in telling post-Soviet readers their own baleful history. But the book has a drumming artlessness—think of Upton Sinclair, Frank Norris—that is meant to tell the facts, and then immediately tell them again, and again.