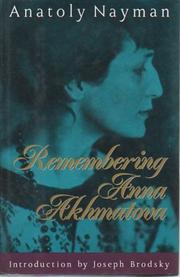 Moving, poetry-soaked memoirs by poet Nayman of his time with Russian poet Anna Akhmatova (A.A.), whom he met in 1959 when he was 23. He later became her secretary. In 1911, A.A. was a founding member of the Poets Guild, from which grew the Acmeists. Until 1922, as we discover, she managed to publish five books, but in 1921 ex-husband N.S. Gumilyov was executed and a year later A.A. was banned from publishing. Her son was arrested three times, sentenced to death (commuted), then exiled, all to keep her silent. A.A. turned to translation, stopped publishing poetry until her ban was lifted in 1940. Later, she was expelled from the Soviet Writers' Union for writing ``ideologically harmful'' private emotions ``totally alien to Soviet literature,'' and her latest book of poetry was destroyed in the presses. To help save her son's life, she unwillingly wrote a cycle of banal poems in praise of Stalin. When Nayman went to A.A.'s house in Leningrad, he met a quiet woman whose ``appearance, words, and gestures all expressed the fact that she was doomed, utterly...I left, stunned by the fact that I had spent an hour in the presence of a person with whom I had no ideas in common...but with whom no one on earth could have anything in common.'' Nayman captures A.A.'s great but reserved spirit largely by repeating her answers to literary questions and responses to poems sent or read to her. By this time, she had a ``phonograph record'' of about three stock replies that sounded thoughtful but said nothing—in her day poets were killed for their poetry. A.A.'s terse poetry is poorly served by Walter Arndt's flowing translations herein, but A.A. comes off majestically anyway. (Eight pages of b&w illustrations—not seen.)