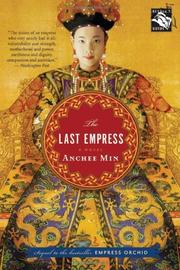 In this sequel to her historical novel Empress Orchid (2004), Min tells the story of late-19th-century China’s crumbling empire, from the point of view of the country’s much-vilified final empress.

Two years after the death of Orchid’s husband, she and his “first wife,” Nuharoo, are sharing the upbringing of the new Emperor, Orchid’s seven-year-old son Tung Chih, and acting as ruling co-regents until he grows up. Orchid is overseeing a nation heavily in debt and slowly losing control of its provinces to western nations and Japan. Orchid is selflessly devoted to governing China. She does not allow herself a relationship with the one man she genuinely loves, focusing instead on preparing Tung Chih for his responsibilities with a single-mindedness that undermines the typical mother-son relationship. When Tung Chih, who hates his duties, dies in his 20s of a venereal disease, Orchid adopts her sister’s three-year-old son Guang-hsu and makes him emperor. Although Orchid loves Guang-hsu, her sense of political responsibility again overrides maternal feelings. The sensitive, sweet little boy grows into an indecisive, insecure ruler. Although recognizing the mistakes Guang-hsu and his advisors are making, Orchid often goes along in order to keep his sense of authority intact. By the time of the Boxer Rebellion, she has lost control over her ministers, even while she is being vilified in the Western press as the “Dragon Lady.” She wants reform and feels camaraderie with Robert Hart, who keeps China financially afloat for decades. But most of all, she wants to keep China unified, a goal that proves impossible.

The great swatches of historical detail will enlighten readers who generally view history from a Western perspective, but with Orchid so busy explaining herself, the human story of a woman who denies her instincts never quite emerges.