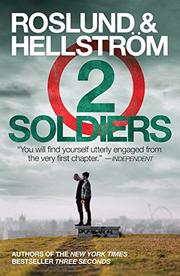 A Stockholm suburb is being terrorized by a teenage gang's calculated reign of firebombings and burglaries. After a beaten female cop is left to die in the trunk of an abandoned car, DCI Ewert Grens will break all the rules in his effort to nab the perpetrators.

The crime wave, which has residents locking themselves in at night, is being directed from inside a maximum security prison by 18-year-old Leon. He's having his "blood brother" Gabriel's girlfriend, Wanda, regularly smuggle in pills as a mule. The gang, dubbed the Ghetto Soldiers, has no reservations about recruiting 12-year-olds to do its grunt work. Their intense hatred for authority is fueled by the violent mistreatment of their mothers by their fathers, but the moms don't catch much of a break either. Down-in-his-cups Grens, who's not unlike Henning Mankell's Wallander, is haunted by an incident from 20 years ago involving someone connected to one of the teen felons. When Wanda becomes pregnant, the story takes a different turn and Grens' past begins catching up to him. This book is no short haul, containing more than 600 pages of terse narrative and circular digressions. But while the seasoned team of Roslund & Hellstrom (Cell 8, 2011, etc.) is a bit facile in its blueprinting of plot, which involves a perfectly timed string of prison breaks, the authors are great at getting inside the heads of the young criminals. The austerity of their style also gains in existential power as you get into the heart of the story.

A bleak but gripping tale of a teen gang running amok.