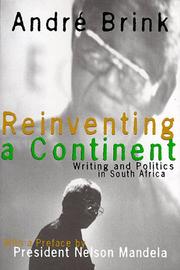 Writing and Politics in South Africa

Like slightly stale bread, these essays (most from the 1980s and early 1990s) by one of South Africa’s leading novelists examining the role of that country’s literature have seen better days. The end of apartheid struck South African artists particularly hard, remarks Brink. So much of their work had been premised on bravely decrying myriad injustices, on supporting the “struggle” as a weapon of liberation. Within these confines, hemmed in by censorship and oppression, extraordinary creativity flourished. But as Brink (Imaginings of Sand, 1996, etc.) notes, “imagination remained predicated on the presence of prison bars.” As soon as the bars started to lift, many artists were overwhelmed by the burden of freedom. But Brink is an optimist. Unlike some of his contemporaries, he has avoided the deconstructionist obscurity or thinly veiled despair that characterizes so much white South African writing today. In fact, many of these essays revolve around potential new directions and roles for art. He goes as far as to compare apartheid’s end to photography’s freeing of 19th-century painting from the constraints of realism. Other essays are taken up with that perennial big issue: the role of art and the artist in society—especially a society where art, at first glance, looks like a luxury. Brink also examines Afrikaner society, rugby, and the minutiae of political developments. There are some embarrassingly adulatory encomiums to the African National Congress and its various politicos (though his accolades from the 1990s are a little more evenhanded). Brink has a clear and forceful, passionate style. But unlike an Orwell or a Greene, he is unable to transform the timeliness of most of these essays into something more timeless. Nelson Mandela contributes the book’s preface. As a record of liberal white South African thought ten years ago, this is a peerless collection, but by almost any other criteria, most of these essays—with a few notable exceptions—are fast slipping into irrelevance.